Before we get to it, I just want to say how thrilled I am to present this interview. I ran across Walter's work when I was researching an early Needle Exchange article for MrXStitch. My lack of German didn't deter me from contacting him, and luckily, his English is quite good. He was kind enough to indulge me by answering my questions. You guys can't see me, but I've been squealing all day with excitement! Also, I encourage you to click the links inserted in the post. Walter's been kind enough to share his favorite artists with us, and they are tremendous. I have also linked to his website under each photo. Many of these pieces are part of a larger series or installation, so please take some time to click through and look at the larger context. His work is elegant, provocative, authentic, and shot through with humor. He is a treasure.


Tell me about your background as an artist.
I studied weaving in Japan, nearly 20 years ago. At the Kawashima Textile School, which is part of the Kawashima Manufacture. They worked in the Meiji-period(1868-1912) for the Meiji emperor. Kawashima Jimbei visited Europa and studied some textile techniques, like Jacquard and tapestry.
But I was drawn to textile much earlier and I worked in textile since very early in my childhood. And I did draw and paint since a very early date. My family never forbade anything, but they worked very much and were not interested in my "art" work.
When I was about 17 I met an artist, Helmut Kunkel.
At his atelier and home I learned very much. He showed me how to draw, he backed my courage and gave me a lot of artists techniques. At that time he did ceramic and I learned a lot about that, too. Our friendship is vivid and inspiring till today.
He is not using needlework as an art technique, he is not sewing or doing anything with fabric or thread.

Many of your pieces use textiles and needlework. Why are you drawn to this medium?
My grandfather was a tailer and my grandma a gifted needlework person. She sewed cloth, knitted, crocheted, from her I learned to use the scissor, needles and the iron. So I had fabric, needle and thread at my hands since I can remember, since longer than I remember. Sewing is so familiar to me like drawing and writing.


What themes you are interested in?
I like explore my attractions. This is things which one can see, but although the things one is fantasizing about. So I explore the body in my work, but at the same time I am interested how other artist did that or still doing it.


Tell me about the Joyful Memory series. How do viewers react to it? What interests you about erotica?
This series was in an exhibition a short while ago and we had a wonderful reaction. It was an exhibition in the flat of my curator, the series was shown in the small bathroom. We heard constantly squeaks coming from there, and laughter. But one young lady went in and she came out with an angry face and wanted to know if it was real sperm, which was used for the artwork. We had a long discussion about the problem of intimacy. Finally, when she left after more than two hours, she insisted on kissing me on my cheeks, which I never expected from her. 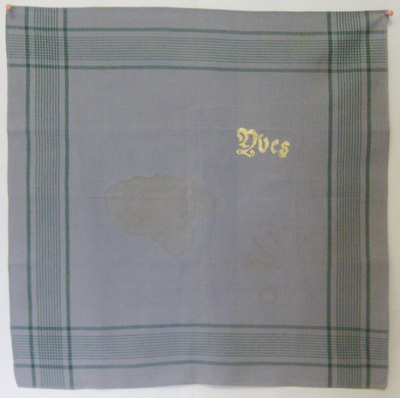 
But as always, my work has a lot of tongue-in-cheek. It is not meant too seriously.

I'm really fascinated by your loincloth series, The Flagellation of Christ, and the loincloths based on the masters. What inspired these? What themes are you exploring?
For a very long time in my life, I concentrated on the Kimono as an art object. I was very fascinated by Japan since my youth. When I turned 40, which seems to be the date for a man, I stopped the kimono and started with new themes and new formats. I turned literally my head, myself from east to west.
Never ever before I had thought about what themes would be important for western art and artists. The first theme which struck me, was Religion. I think that Religion is minting us much more than we think. And it has shaped a lot of the art we look at in Museums.
(By the way, I am not religious in that way, that I cling to a church or something like that. I was brought up in an environment with a catholic father and protestant mother, but had access to both religions. In my youth I was very drawn to Zen Buddhism, and had a very good time with it. Later on I managed to find my own way.)

So from the point of change in my art, as told before,  I looked for what could interest me. The first thing I did was starting a project, which is still going on. I collect 11000 signed handkerchiefs of women from all over the world. It has to do with the holy Ursula, the saint of the city of Cologne. A myth is stating, that she had a company of 11000 maidens, all of whom where slain by the Huns, who laid siege to the town (very long ago). I wanted this myth to get into our reality, without showing the cruelty connected with the story. (Click here to see the work in progress- Penny)

The next project I wanted to do something which should deal with some men. And I found in the middle of the Christian religions this nearly naked young man, being tortured and crucified. How interesting, I thought. And in the center of every picture of him one can find a textile, which is concealing his manhood and at the same time is making him more naked.
This shroud was a theme I really liked to work with. 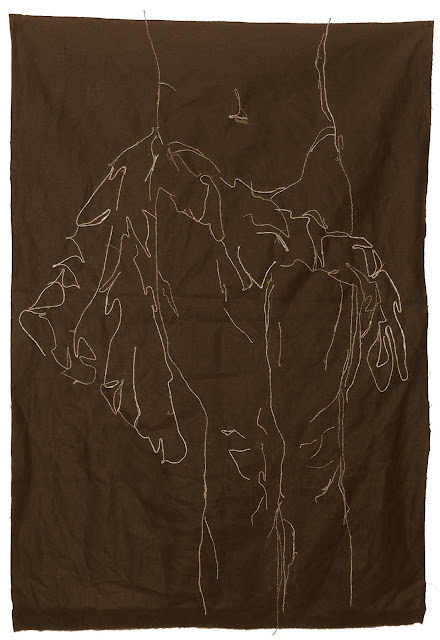 And after this, I wanted to make another statement. I wanted to show how women can use a piece of cloth. So the series of Venus emerged. Here I concentrated on some paintings of one Master, Lucas Cranach the older. And I found a lot of pictures, lot more than I expected about the Venus, made with the same model. A very young girl, just at the border of being a woman. But again I concentrated on the textile, in this case called a veil, and made is the center focus of my pictures. 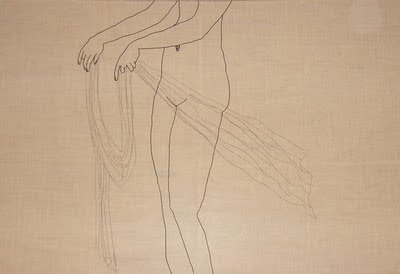 Tell me about your sculptural work.
This is mostly installations, sometimes things clustered together to give an atmosphere, like in "Anna". 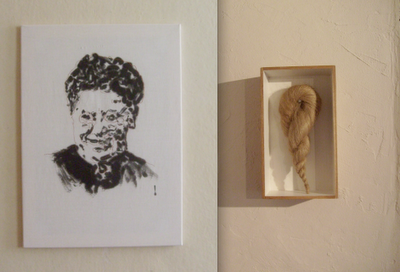 At the moment I make hearts. Which I sew and stuff, to give them shape. I had made a series of organs, before. And there is a series of vaginas in small Sardines-cans 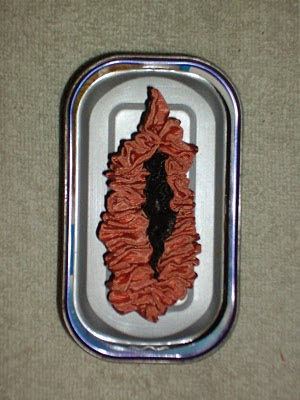 What other mediums do you work in?
There is a big series about ink painting or calligraphy on book paper. 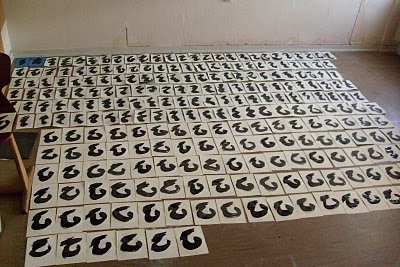 Sometimes I combine painting and embroidery. Some installations are from different materials.


Who are your favorite artists? How have they influenced you?
My greatest favorite is Kiki Smith. I love her work and I think she is the strongest influence since more than four years.  There is a great German embroidering artist (man!), Jochen Flinzer, which influenced me at my start. I am delighted by the work of Erwin Wurm.


What are you working on these days?
The heart series. It is like a drug, I can not stop making hearts. And again, this is a series about women. 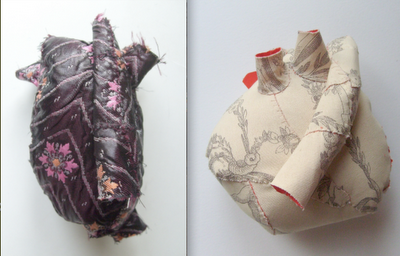 Left- The Heart of Nora Banacle, Wife of James Joyce
Right- Heart With Fine Print
But next year there will be an exhibition in a Museum in Neuoetting. Next is the famous city of Altoetting, a pilgrimage site since more than 1250 years. I make new works for this, giving an answer to the relics, which interest my very much.
I started to work on a big embroidery. The theme will be the Japanese 'Nehan', this is pictures showing all beings mourning the dead Buddha Shakyamuni. I will show a figure of the dead Christ, mourned by animals and unearthly beings.

What do you want viewers to take from you work?
I love, if I can touch people. This is what I expect from art, to feel touched. I like to give them a smile inside, too.


Do you have any advice for other artists?
I think it is very crucial to listen to your self. One needs to know himself as much as possible. I had the luck to meet the Japanese Zen Buddhism, when I was very young. It gave me techniques to explore my self and dive deep into me. I found things I liked and things I disliked very much. It is an endeavor to learn to live with all this, not to reject and not to become rampant.
Love is most important. 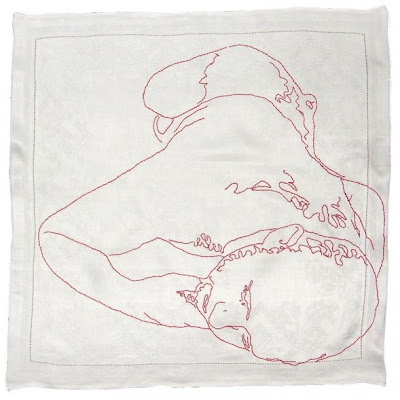 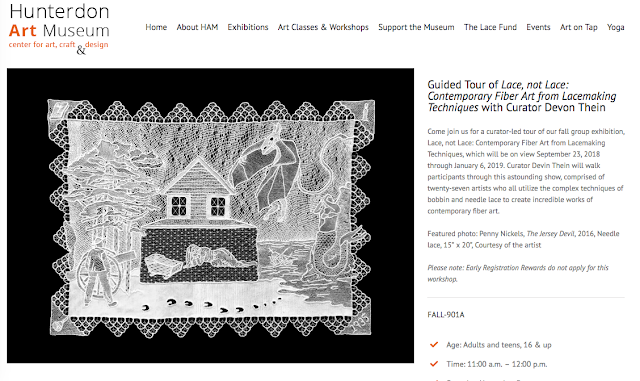