The results of the PUSH contest are in! Turns out, we have a tie! Our grand prize winners are David Hill and Lord Libidan.
First up we have David Hill's piece "Priest". 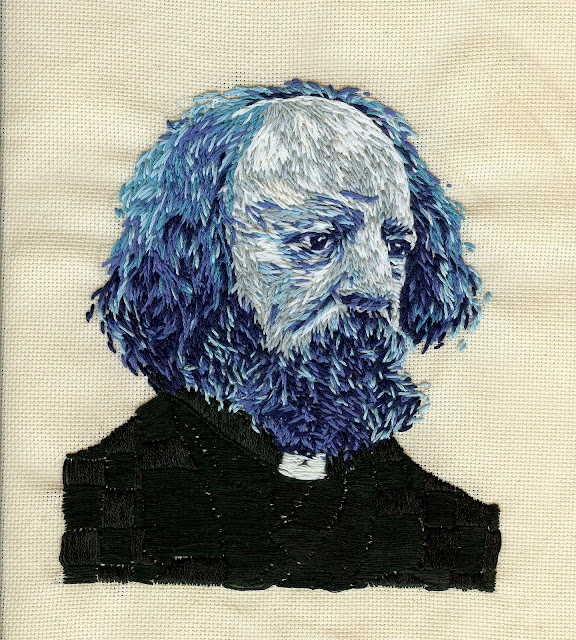 Here's David's essay-
Hi there! This one is simply called 'Preist' and was produced using a needle and cotton thread on 18 count cross stitch material (i used that material for it's sturdiness, not the 18 count haha) it's dimensions are: 15cm x 17cm
This is only my 2nd finished piece as I have only been doing stitch work since around mid July '11 (I started doing it to pass the time and say, at the end of my summer holidays, that i have had a productive summer before returning to my second year of graphic design)
I was asked to produce this for the EP artwork for my friends in a brilliant two piece band called 'Algiers'. They saw my first embroidery piece on a t-shirt and decided to get me to do the album cover.
I am particularly proud of my choice of colours for this one as I am usually not very good at choosing exciting 'popping' colours. It really adds to the emotion on the face of the guy i think. I believe the technique i am using is called 'silk shading' (I saw a picture of said technique in a traditional hand embroidery book and guessed its the closest technique to what i do) although very loosely. i must admit i really don't know much about embroidery at all... I'm getting there though! I didn't have any previous hand embroidery experience (except with a button or two) so the colour mixing was a bit of guess work and risk to see how it came out. And i must say so myself it payed off.
My favourite little aspect of this is the profile line running down the right side of the face. There is a really strong contrast and it defines the whole face. Another favourite part for me is the priest's clothing. No one will spot it, but i added lapels and creases to the t-shirt by using different patterns. And the shoulders are separated be a weave-looking checkered pattern. Very subtle, but I've always liked doing that sort of thing in my drawing. It's something I can do a lot with embroidery because I think a lot about the direction of every stitch and what it will do to the fluidity of the work.
I really enjoyed doing this and i'm looking forward to producing more work. The album that this work is for is coming out sometime mid october. by which time i should have my stock of t-shirts that arrived yesterday embroidered and ready to take in to shops and sell. I'm REALLY looking forward to carrying on with my technique and believe the way i do it and the non-uniformed approached is something of a unique aspect.
Hope you think so too!
Thank you very much for reading
Dave Hill
http://hillda.tumblr.com/
______________________________
Our other grand prize winner is Lord Libidan with his piece, "3D Transforming Robot/Truck Fully Articulated Figure" 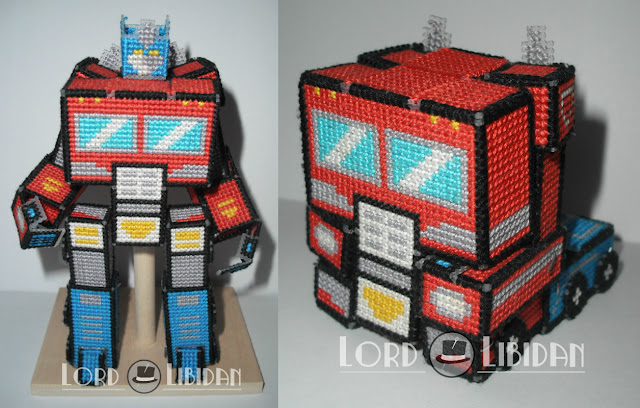 Here's Lord Libidan's essay-
Title: 3D Transforming Robot/Truck Fully Articulated Figure
Materials: Plastic canvas and embroidery thread
Medium: Textiles/Fibre art
Dimensions: Robot - 15cm x 9cm
As a male cross stitch designer/artist I've never been fully happy with the range of designs out there, due to their ease and rather boring subject matters.
As a response I've always tried to keep my stitching in with current male trends in terms of movies and games, while still making something more challenging.
While playing around with plastic canvas for the first time I started to think outside the box, and wasn't happy with the range of things people have done with the canvas before; making covers for tissue boxes, etc.
My piece is a fully articulated robot figurine based upon the transformers series, however as I started to make plans I wanted to do something a little different. I looked at current figures, online paper models, and pictures and came up with my own way to transform the robot into a truck, and back again.
My main aim with this piece was to create something still decorative, but something useful, and hopefully to children something to play and learn with, rather than just being something to sit on the side and get dusty, and something that will be held with high regard, rather than the plastic toys that get thrown out every year. The piece was then made into a pattern so that early teens, can make the toy for their younger siblings or in most cases for themselves.
This piece is now part of a series including many other transformers, and gets regular attention for being something different, but not too artsy fartsy. Hope you like it :D
http://lordlibidan.wordpress.com/
http://www.etsy.com/listing/74962335/transformer-optimus-3d-cross-stitch
*You can find the pattern for the transformer in his Etsy shop!
_________________________________
Finally we have our two runner-ups, Stefanie M. and Di Ellis.
Stephanie's piece is titled "Hair". 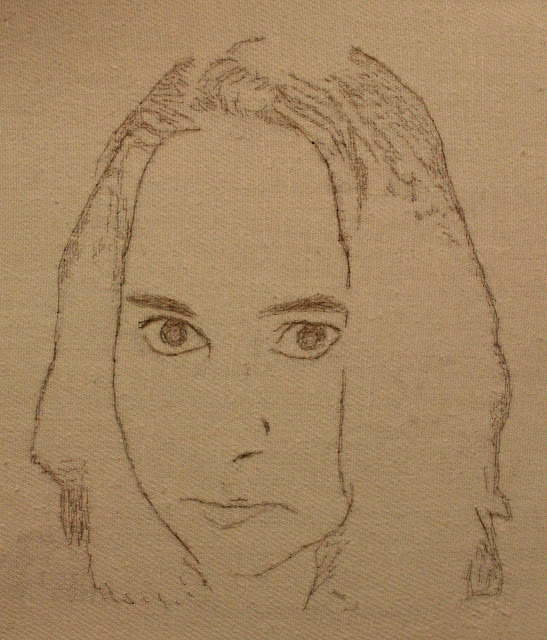 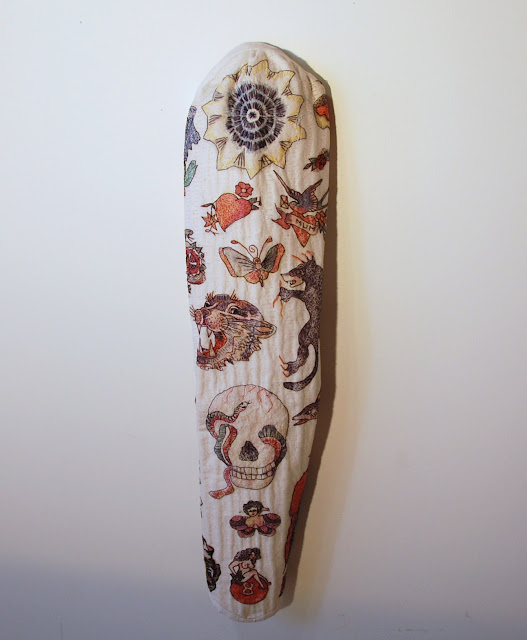 "Tattoo Sleeve" Cloth, hand quilted, and hand stitched
You can see more of Di's work at-
http://diellis.blogspot.com/
So that's it! Grand prize winners will also have their work and essays posted on MrXStitch.com and will receive a signed copy of PUSH. Runner-ups will have their work posted on MrXStitch.com and receive a paper cut by me celebrating their win. 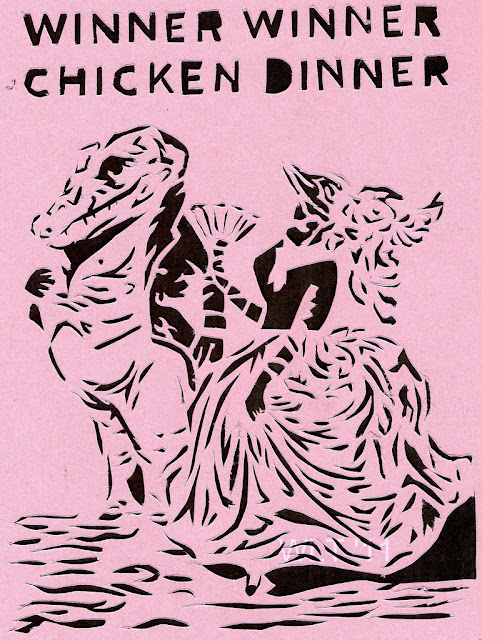 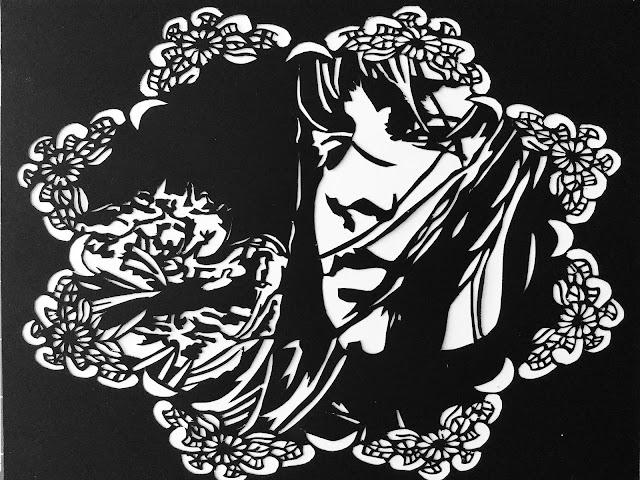